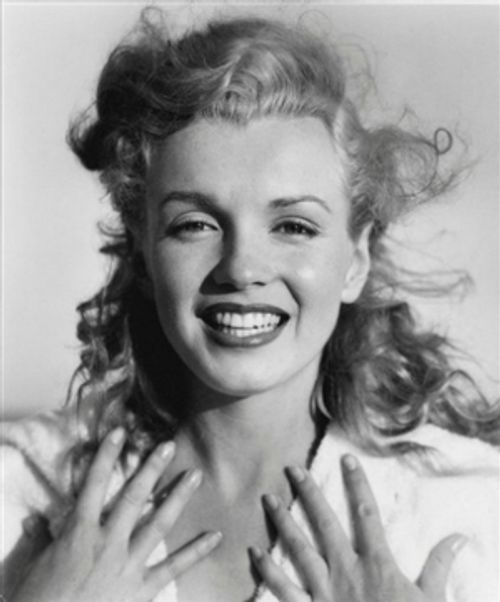 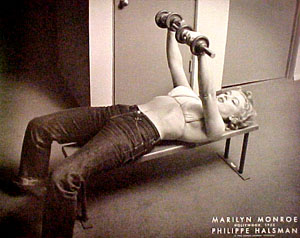 Some think Marilyn Monroe was one of the lucky ones: Born with a perfect body, great looks, etc..The truth is, she followed a regimented diet and exercise routine that earned her the figure she was so famous for. She didn't exercise fanatically like many do today; but she was very good at following the fitness principles that are most important.

While researching Marilyn Monroe, it became obvious that she actively promoted herself as a 'sex symbol'. Objectifying one's self is a destructive path I wouldn't wish on anyone; so we hesitated to share her diet routine. However; her example should be very encouraging to everyone with weight problems.

Ms. Monroe was a full-figured woman. Women with this body style have a hard time staying slim: They generally have a slow metabolism, so it's easy for them to gain weight and very hard to lose it. Hopefully; it's an encouragement to know that Marilyn Monroe was genetically predisposed with a weight problem:
She developed a slender, well-muscled physique; so if she did it, anyone can do it! It just takes discipline and perseverance.

This is my favorite photo of Marilyn Monroe.
The photographer seems to have caught an
un-rehearsed smile on her face.
It's genuine, infectious, and sweet! 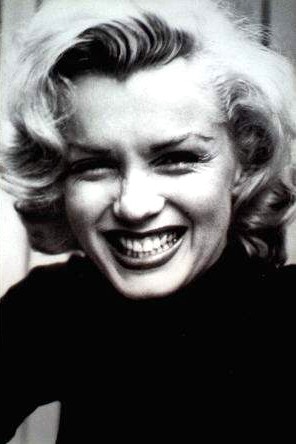 Marilyn would typically exercise with 5 or 10 pound weights for about 10 minutes. She'd do a few sets of DB bench presses and arm circles. According to Marilyn, this routine would "firm up the wobbly parts".
There were times in her life when she jogged on a regular basis, but not often and not very far.
Most often, this was Marilyn's routine:
A 10-minute workout in the morning, 3 or 4 times a week.

Pageant Magazine obtained a few of her grocery lists in the early 50s. Based on her shopping habits, they concluded that she liked to cook, and she ate quite a lot compared to her peers. But as her diet below indicates, she ate right, and she ate at the right time.
Marilyn shared her daily diet routine with Pageant and several other outlets, so we were able to confirm the information below thru multiple sources. 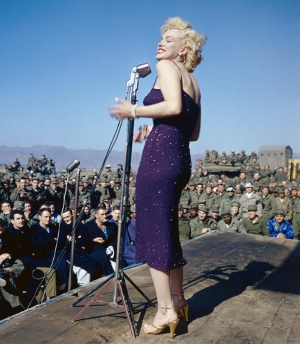 If she was in a hotel, she'd heat a glass of milk on a hot-plate while she took a shower; then she'd stir two eggs into the milk and drink it. Rocky's got nothin' on her!

Snack:
1 cup of milk and a cracker.

Snack:
1 cup of milk and a cracker. 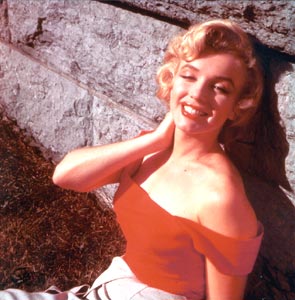 Dinner:
A meat dish (Lean beef, chicken, fish, or chicken liver)
1 potato
Junket is a mixture of sweetened milk and the ruminates from animals such as cows or goats. It's made into a pudding, chilled and served as a dessert.
'Sounds really gross, right?

Note to my chef: I prefer my animal ruminates in the form of a hot dog.
1 serving of vegetables (tomatoes, beets, carrots, spinach, peas, or string beans).
Dessert: junket, custard, tapioca pudding, rice pudding, or a baked apple.

11:00 P.M.:
1 cup of eggnog
If your goal is to promote muscle growth and lose fat around your waist, this diet is bullet-proof!
None of the meals are large. There are no all-you-can-eat challenges in this meal plan!
Binge eating is never a good idea. It gorges your body into accumulating fat, and doctors are connecting it with other health problems like diabetes, high blood pressure, and cancer.
Consistently eating every 3 hours sends signals to your body that it never has to defend itself against starvation. This will cause your body to shed fat in your waist and hips!
IE: A camel develops a hump for protection against starvation and thirst; healthy men and women can accumulate fat around the middle for the same reason.
Including a good source of protein in every meal helps promote muscle growth, which makes the most of your workouts.
If you eat right, you don't have to 'kill yourself' in the gym.
Conversely; even the best workouts can't overcome a bad diet.
Most people who fail in the gym are usually eating poorly and/or over-training.
Eating a substantial breakfast gets your metabolism going and it helps keep your body from going into "starvation mode".
Please refer to the following articles for more advice on how to eat and exercise effectively:
Practical 'Weight-loss' Tips
Fundamental Weightlifting Principles
Marilyn Monroe was considered by many to be the most beautiful woman in human history,
yet today's Hollywood fitness routines are dramatically more difficult than hers.
Many actors obsessively over-train, they follow starvation-type diets, and many of them fail:
They are doing less with more!
They should take a tip from Marilyn.